Oene van Geel and Mark Haanstra share a musical history of more than twenty years. Traversing eclectic musical genres - jazz to classical, Indian to pop music - has led them to a surprisingly original idiom. Equipped with only a viola and a bass guitar, they have achieved an equally surprising contrast, with what is essentially the smallest ‘band’ possible.

The duo started when they recorded three tracks in May 2016 for Oene van Geel's acclaimed solo album 'Sudoku.’ Dutch audiences immediately noticed and soon thereafter they were performing on major festivals and venues in the Netherlands.

There’s no hiding in a duo, and this unique instrumentation turned out to be the perfect vehicle to communicate with each other and their audiences, directly and intimately.

Their investigative and open attitude invites new collaborations. This became very clear in their new release ‘Shapes of Time.’ Together with visual artist Udo Prinsen and guitarist Raphael Vanoli, they’ve produced a gesamtkunstwerk, poetically combining images and sound. This special book/album didn’t go unnoticed: They’ve made many public radio and television appearances and received rave reviews from the press.

Please take a look around!

You can also find us on 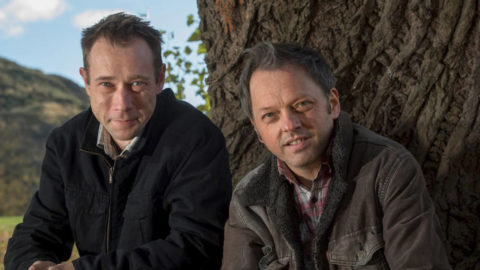